Jira added comment sorting by newest first, in addition to the traditional oldest first. They even forced this on for everyone by default (ugh). Of course, I hate it because it puts things in the wrong order. But the worst part of the update is that they broke the existing behaviour of sorting by oldest first.

Since I can’t stand this broken logic, I have created a userscript to fix it. All this script does is locate the button on the page and click it. Once again, scrolling to the bottom of the page will show the most recent comments (and new comment box)!


I have written about how my site was hosted at nosupportlinuxhosting a few times. They were recently hacked, and since it was their admin server, rather than just their hosting servers that were broken into, they were apparently unable to continue and have shut down. RIP nosupportlinuxhosting.

Of course… that meant I had to move my site to a new host. END_OF_DOCUMENT_TOKEN_TO_BE_REPLACED


I almost gave up on this watch…

It came with a fairly standard strap. The kind I can’t tolerate while working. So in order to wear it at all, I had to constantly take it off and put it on again. Literally the day I got sick of it and decided I’d just stop wearing it was the day the replacement strap arrived.

My wife’s watch came with a velcro strap. I thought it looked interesting. I hoped it would be a bit quicker/easier to take on and off. I figured it would allow for more accurate tightness control, compared to the fixed positions a buckle offers. I had ordered a similar strap for my watch.

It was night and day. This one accessory made me love the watch. Or at least, it stopped me from throwing it away. END_OF_DOCUMENT_TOKEN_TO_BE_REPLACED

A little while back, Atlassian decided that everyone has ultra-wide screens, so the right column should be wide (1/3 of the screen) and that it should scroll separately to the main content.

I have created jira_resize_right_column.user.js as a fix. It’s a bit nasty, but it is working for me.

1) It tries to remove all the scrolling bits from the page so that there is only a global page scroll again.
2) It set the right column to a much more reasonable 20% of the page width (by default).
3) It gives you a resize handle (the blue square at the top of the screen) that you can use to set the right column width.

Resizing the column is … dodgy. It seems to calculate the width incorrectly, but it does sort of work 🙂

Honestly, the worst part of this script is that it works after the page loads, so for the 18 seconds or so it takes to load any Jira page, you’re stuck looking at the horrible new design before the script fixes things. Maybe one day Jira will load quickly, making that problem go away.


About a week ago, I bought a Ticwatch E. It’s my first smart watch, something I bought in a fire sale in order to see if this kind of product even makes sense for me. So how is it faring? END_OF_DOCUMENT_TOKEN_TO_BE_REPLACED 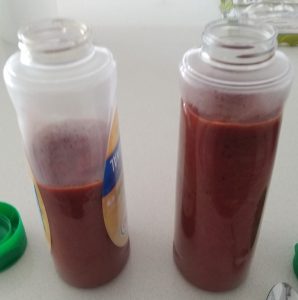 This is the third batch of chilli sauce I’ve made and I actually took some notes this time. Each batch has been slightly different, but the general aim has been more or less the same. I like a thick chilli sauce that is both hot and tasty. END_OF_DOCUMENT_TOKEN_TO_BE_REPLACED

MacBook Pro lives to fight another day (and other computer news)


My venerable MacBook Pro, a 13″ 2011 model, had a problem with the screen after the recent surgery. It just… stopped closing all the way. I thought maybe the case had been warped, possibly as a result of having nothing where the optical drive should be, but after putting up with it for a few days, I did some googling and found that it’s a somewhat common complaint for older machines.

Maybe the timing was just a coincidence, or maybe I got something (dust?) in the hinge. What I saw online suggested replacing the hinges, or maybe lubricating them would work.

So last night I had my computer open once again. To get the hinges you’ve got to take the whole screen off. The instructions have some ominous warnings because once you take out that last screw, the screen and body can just fall apart from each other if they’re not being supported.

I was kind of surprised that I couldn’t actuate the hinges with my hands… I guess the force they get with the weight (and leverage) of the machine attached is much higher than I can impart.

I sprayed a bit of WD40. I know it’s not strictly a lubricant but it’s what I have and it can work its way into tight spaces. Since I couldn’t actuate the hinges I had to put the machine back together before I could tell if it had helped. Also, I was nervous about the things I’d had to unplug that had never been unplugged before (like the video cable).

But the hinge works just fine again, and the machine booted up. Everything seems to be working. Another successful operation!

In other news, we sold the MacBook Air and used the money to get an RX580 for my son’s computer. He was very specific about wanting that card, even though it’s a little older, because newer/cheaper cards don’t have support for older DirectX versions except through emulation and that gives worse performance, and he has a bunch of older games. It turned out to be a convenient coincidence that we had a 90 degree sata connector on one of the cables though, because the motherboard put one of the sata ports under the back of the GPU.

The memory failures… I dunno. The shop did a “clean and reseat” of the RAM and said it was working. After dealing with some USB issues, we were able to get RAM errors once (after 7 hours of running memtest) but… after figuring out the USB situation, the memory errors have gone away. In any event, the machine seems to be stable so… I guess we’ll wait and see on this.

We’d also asked them to check on the front USB port (which had been causing stability issues, but my son hadn’t cared enough to lose his machine while it was repaired). They said the USB was fine, but when we got the computer home we found they had only connected the USB 3 pins, not the USB 2 pins. A bit of shuffling later and we were able to confirm that the black port on the front is fine but the blue port cannot be connected to the USB 2 pins or the system is unstable. Apparently USB 3 devices will be fine (though I don’t think we’ve tested that yet) but things like USB sticks won’t work. My son doesn’t want to lose his computer over 1 nonfunctional USB port so once again, we’re going to ignore it.


The MacBook Air was indeed a nice host for woody. It ran without complaint and it was quiet. Interestingly, it did network transfers slower than I expected. I can’t believe it was the SSD (though I didn’t run a benchmark) so it must have been the USB ethernet dongle I was using.

The HP was attacked by my son and one of the things he found was a literal wall of dust in the exhaust fan (almost completely blocking it). With the dust removed, the chronic overheating issue was resolved. Then he was given another old laptop, an Acer Timeline X. He decided that he liked it better than the HP, so over the weekend we did some major shuffling.

I mentioned last time that the SSD was complaining about errors. Well… I don’t know why but apparently Apple SSDs don’t work properly with SMART unless you’re running macOS. Both the MacBook Pro’s original SSD and the MacBook Air’s SSD come up with errors under Windows/Linux yet report as fine under macOS.


The server originally started out running on a Northwood Pentium 4, hence the name. Since then, it’s been a VirtualBox guest on my gaming PC, and for quite a few years now, it’s been running on a HP 8530w laptop I got while working at Nokia.

Ever since my son bought his own gaming PC (back in January), the MacBook Air he had been using has been unused and I had been eyeing it off as a new host for woody. END_OF_DOCUMENT_TOKEN_TO_BE_REPLACED

That time I implemented objc_msgSend in PowerPC assembler


A little while back, I worked for a company that was using Objective-C on Linux. They were upgrading their toolchain to take advantage of newer language features, like C++11, Objective-C++ and Objective-C 2.0. END_OF_DOCUMENT_TOKEN_TO_BE_REPLACED